Even though it’s been two years since “Westward HO!” we’ve barely managed to make a dent in the list of things to do and see in Southern California.  This summer, we opted for a classic “stay-cation” exploring some of the hidden (and not so hidden) delights of San Diego and Orange Counties.

Old Town San Diego is considered the “birthplace” of California, the site of the first permanent Spanish settlement in California. It was here in 1769, in the hills overlooking Old Town, that Father Junipero Serra came to establish the very first mission in a chain of 21 missions that were to be the cornerstone of California’s colonization.

Old Town is now a state park and features a number of historic buildings, many of which have been cleverly turned into shops and restaurants.  We spent a leisurely afternoon popping into shops, eating lunch and purchasing a new piece of art for our home. 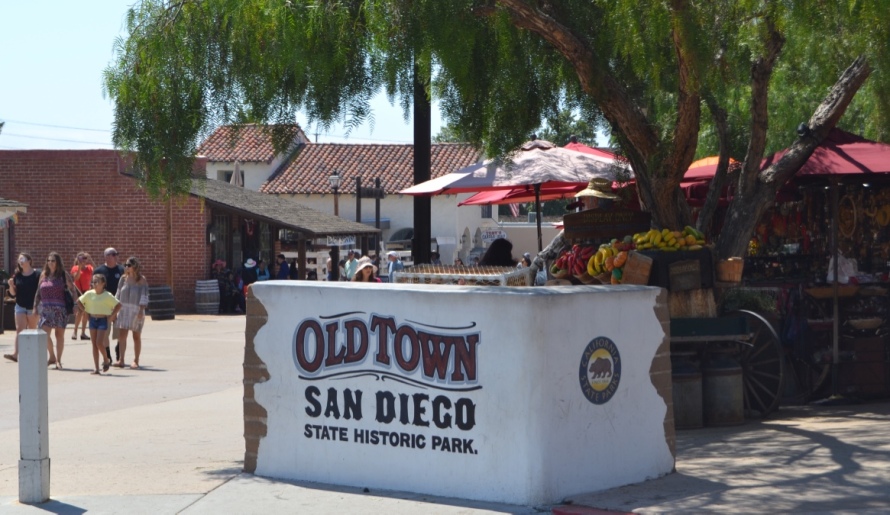 Nice marker letting us know we found the right place 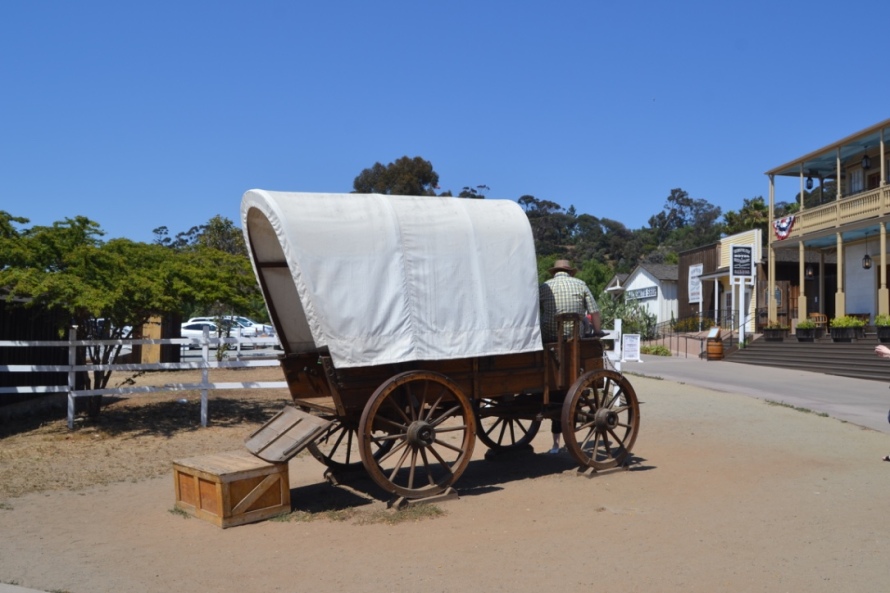 About 2 hours north of our home is the city of Long Beach…I’m sure residents have a lot to say about their stomping grounds but what we find particularly special is our favorite beachside restaurant–Belmont Brewing Company.  After a lazy afternoon reading by the water at Bolsa Chica State Beach, we snagged a table on the “far patio”–not to be confused with the middle patio, first patio or inside–and enjoyed dinner while watching bikers and runners work off their daily stress.  Tim had the fish and chips and I ordered the lobster bisque; both meals were fabulous and followed with a decadent brownie sundae.  Afterwards, we walked the Belmont Pier and watched the sunset over the city.

Bolsa Chica all to ourselves 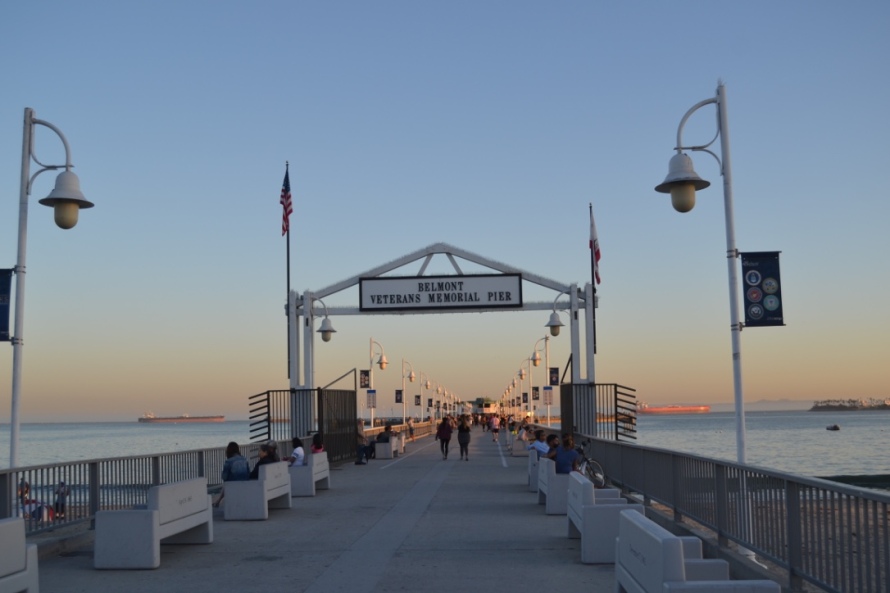 OK, we’ve made stops at these two places before but on a clear day, there’s something special about being on an island devoted to reveling in the best of seaside living.  While strolling the streets, we overheard a tourist tell his friend, “This has got to be the best city I’ve ever visited. I can’t wait to come back!”  and we agree.  The drive to Coronado begins with a trip across the Coronado Bridge which spans San Diego Bay…it’s not a particularly beautiful bridge but it is very tall–allowing navy ships to pass underneath and earning it title of 3rd deadliest suicide bridge after Golden Gate and Aurora Bridge in Seattle.

The best way to spend a morning on the island is on foot. After driving the Strand, a thin highway linking Coronado with Imperial Beach, we parked the car near the Hotel del Coronado,a wooden Victorian beach resort built in 1888 and the jewel of the island. We walked through the hotel lobby and onto the pristine white sand beach and admired the current sandcastle creation built by The Sandcastle Man, Bill Pavlacka. From there, we continued our stroll along the streets of Coronado looking at shops and dreaming of owning a seaside cottage. 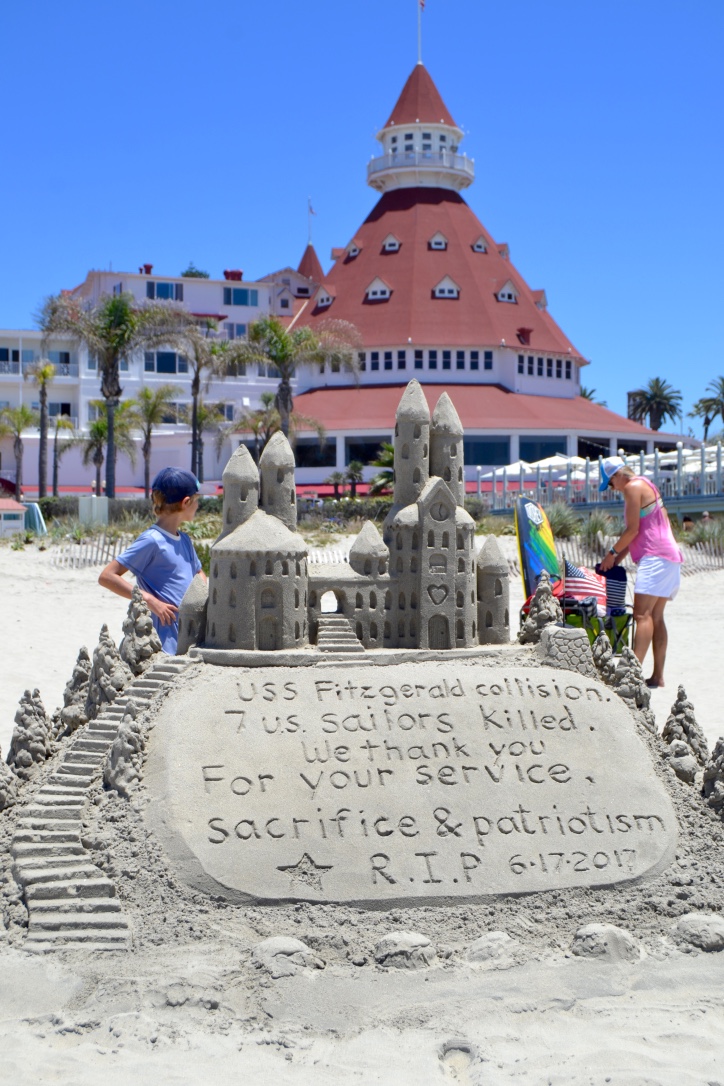 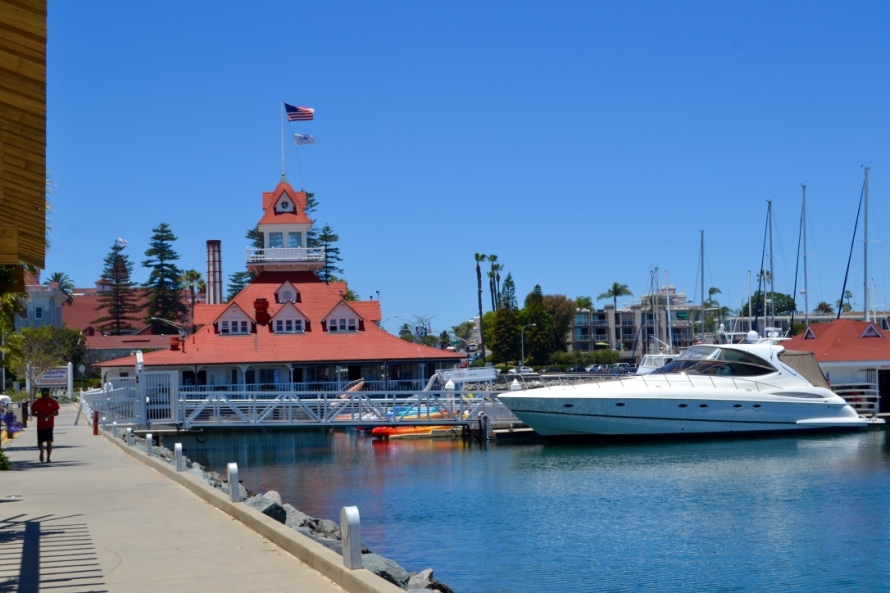 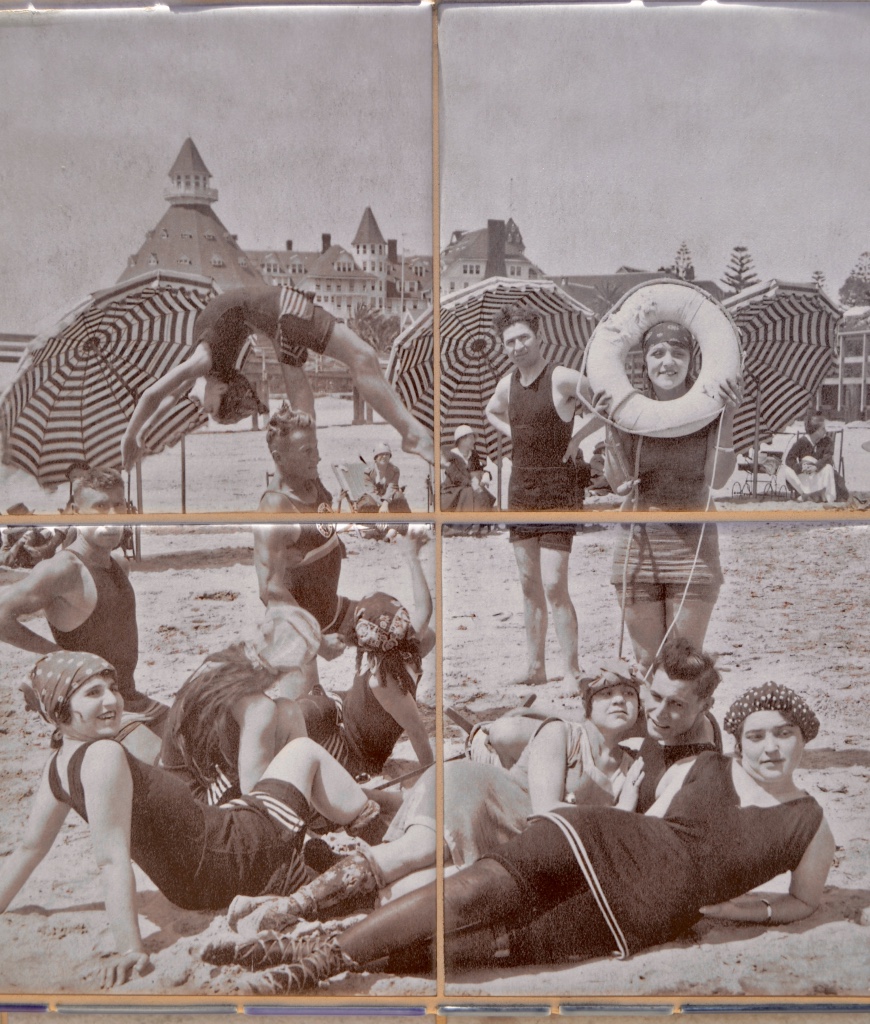 Boy, am I happy we don’t have to wear boots to the beach! 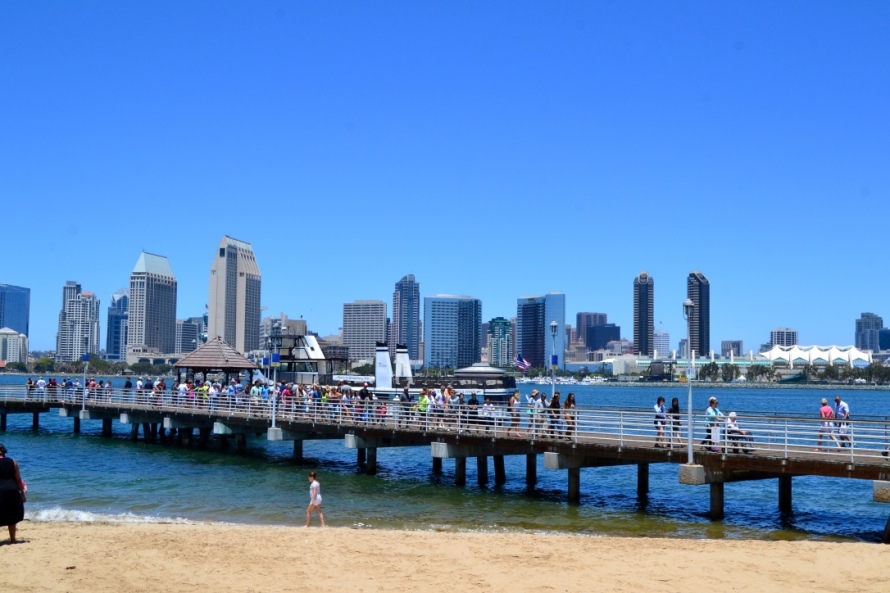 On our way over to Point Loma we stopped at Liberty Public Market, a warehouse chock full of eateries serving unique ethnic cuisine ready for take out. On prior visits we’ve indulged in piping hot empanadas, decadent French macaroons as well as roast beef sliced thin off the spit. This time, we thought Mexican sounded good and since it was Tuesday, we splurged for Taco Tuesday–3 tacos any style. We had chicken, beef and shrimp. Each were out of this world…finger licking good. Tim also had a beef quesadilla and I ordered the horchata to drink.  Once again, this place hits it out of the park. We have yet to have a bad meal.

Stone Brewing has a great outdoor garden at Liberty

Climbing out of his boat and onto shore in 1542, Juan Rodriguez Cabrillo stepped into history as the first European to set foot on what is now the West Coast of the United States. A drive to Point Loma takes you through Ft Rosecrans National Cemetery and offers visitors a chance to play in the tidepools.  However, low tide is best in winter so mostly what you see in summer is a great view of the Pacific Ocean. Not too shabby for a day in the city.

Always an explorer, Cabrillo promptly claimed the harbor for Spain and then moved on. 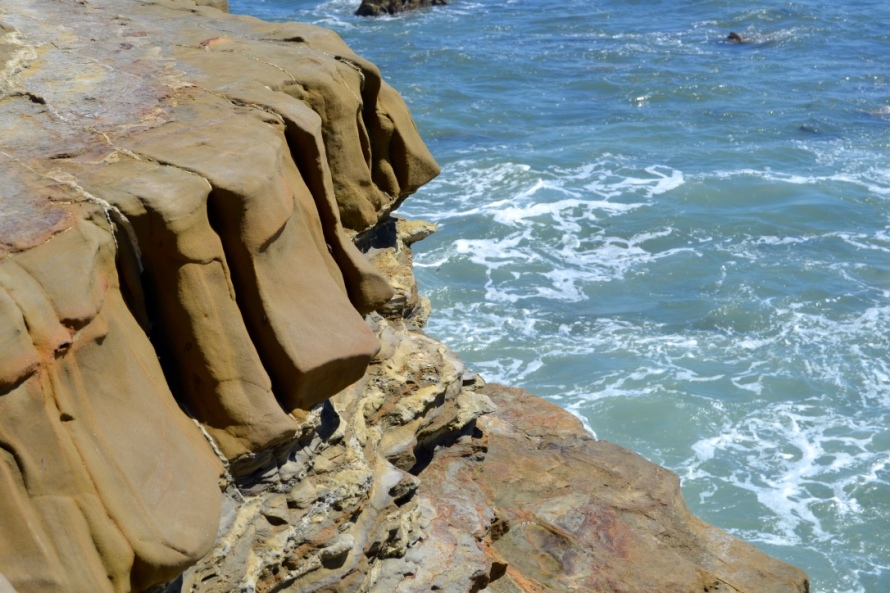 The best way to see the natural delights of the city is by bike.  When traveling by car south on the 5 Fwy, I often spot bikers casually enjoying their time along the bay.  While San Diego has been slow to adopt the pay-as-you-go loaner bikes that other cities have, they make up for it in miles of designated bike lanes. My mom and dad came down from Anaheim with their bikes and the four of us headed out early one morning to bike the 12 mile path around Mission Bay.  Cool ocean breezes, friendly faces and a seafood lunch made the excursion well worth it. 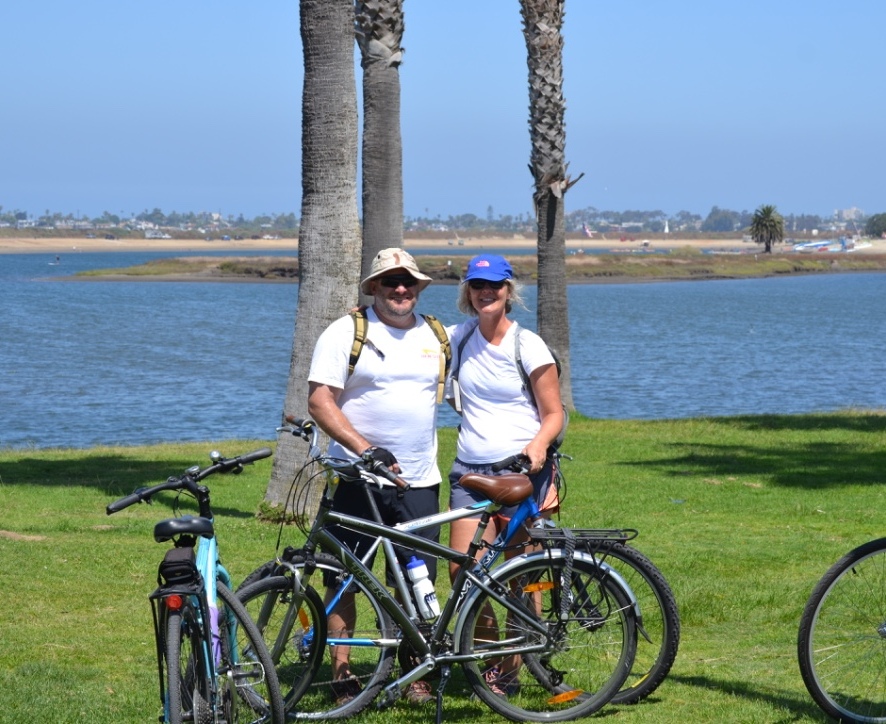 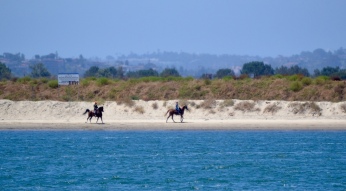 wild horses–well, not too wild

the path in front of me

a great place to be inspired to paint 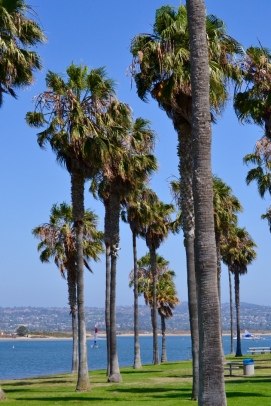