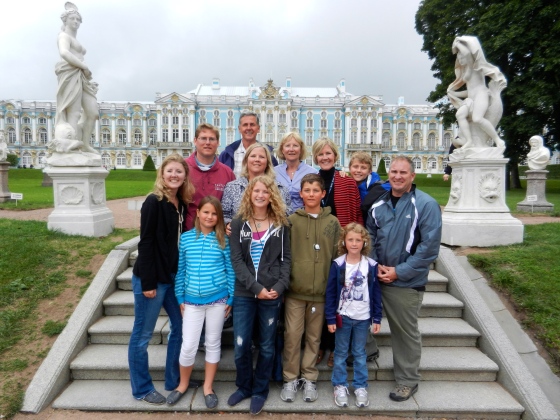 Of all the stops on our cruise, perhaps the crown jewel was St Petersburg.  Partly due to the fact that few have ever seen this city and partly because it was the end of our week-long cruise, we were eager to get off the boat and take in as much of Russia as possible.  I was able to secure a tour through Red October Tours prior to leaving the States and our tour guide, Svetlana, was waiting for us when we got off the ship. We were among the first passengers to clear customs in Russia and we kept thinking we were going to be stopped for some reason.  But, it was an easy process and we made our way to the private coach hired to take us around town.

Our first stop was the Winter Palace, a 30 minute ride from the ship.  The palace was built in the small village of Pushkin and it was interesting to see the combination of small private homes, large apartment buildings and government monuments along the drive.  Probably the first thing your eye takes in is the fabulous blue the palace is painted. No where else in Europe is this color used so predominantly.  We were struck by the sheer grandeur of the building, which was built not as a residence but as a show piece to prove how rich and powerful the Russian nobility was.  The rooms were filled with gold, mirrors and lots of decorative touches.  The palace grounds are immaculately groomed and offer sweeping views of the property. 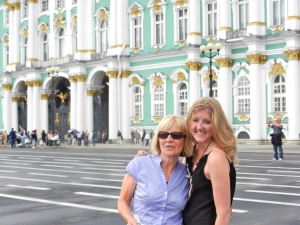 Lindsey and Eva at the Hermitage, St Petersberg 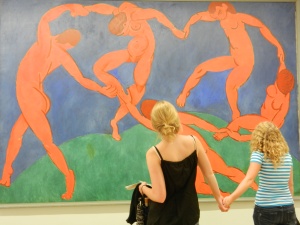 Inspired by the art at the Hermitage

Following our stop at the Winter Palace, we took the opportunity to eat at the original stroganoff restaurant. Legend says that a soldier, who lost his arm in a battle, was served this beef main dish because he could eat it without using a knife.  It was absolutely delicious.  My personal recipe doesn’t even come close.  Accompanied by a cream of mushroom soup and a drink called kvass (like root beer but has some fermentation process) it was the perfect break to reenergize for the afternoon. 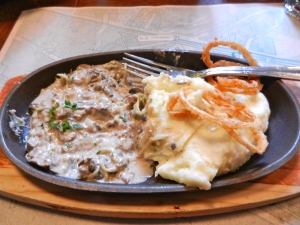 Mmm, nothing compares to the original! Russian Beef Stroganoff