What to do with a week off of school and work? Time to take a trip.  Many of our friends opted for warmer locales…Portugal and Italy; but we decided it was time to go north to see the tulips of Holland. Along the way, we planned a stop in Cologne, Germany, home to the 3rd largest cathedral in the world (after Seville, Spain and Madrid, Italy).  The Dom was completed in the mid 19th Century after a 350 year pause in construction. Seemed the Germans in the area suffered from a little recession brought about by the discovery of America and new trade routes which ditched the Rhine in favor of the wide open seas.  The foundation stone was laid in 1280 on the site of the first church in Cologne which wasn’t impressive enough for the Church at large.  The gothic architecture, featuring dark stone, gargoyles and flying buttresses, is due to the Prussians’ misguided idea that Germans invented the unique style (they did not–the French did) and money poured freely into the coffers to offer up a uniquely “German cultural landmark” to unify the new German state in the 19th Century. 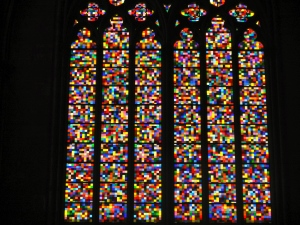 Lauren and Kristen took a tour of the cathedral while Tim entertained the un-interested (Will and Lilly) with a trip to Dunkin Donuts.  In the tour, we learned about the patron saints of the church: The Three Holy Kings, AKA the three wise men who visited Baby Jesus. In a golden, jewel-encrusted box on the altar lays the remains of the kings.  DNA testing on the bones and the clothing has proved that they are indeed from the 1st C…whether they are the wise men, we’ll never know for sure.  We also enjoyed learning about the stained glass in the cathedral which was relatively unharmed during WWII (only the north tower suffered bomb damage)  All windows were removed and stored for the duration of the war. The most recent window, installed in 2007, features thousands of technicolor squares with no discernible pattern…it is a fabulous addition to the cathedral.

It's the memory of a splendid place that continues to go with the moving traveler for the rest of life, after he has had the experience of it and gone away. Hemingway said to a friend..." If you are lucky enough to have lived in Paris as a young man, then wherever you go for the rest of your life, it stays with you, for Paris is a moveable feast."
Loading Comments...
Comment
×
%d bloggers like this: