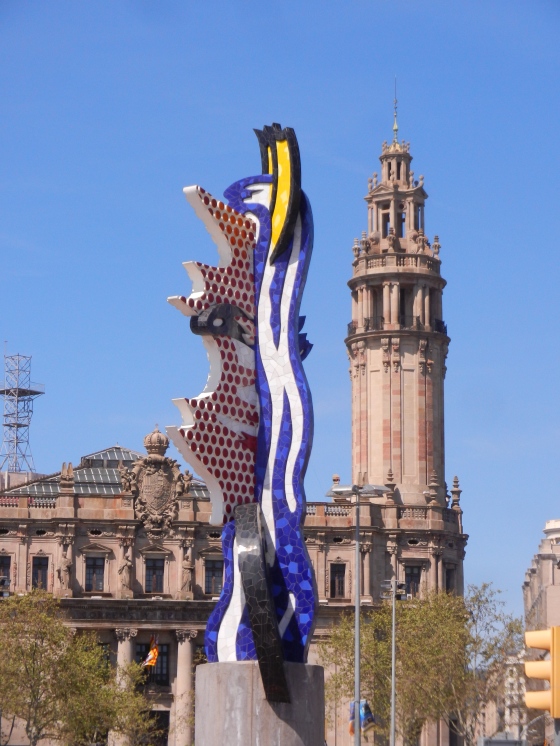 Barcelona art is found throughout the city

After a long and grey winter in southern Germany, a Spring Break filled with sun and warmer temps was definitely our goal. We booked a flight with a new airline, Vueling, and flew from Munich to Barcelona in just 1.5 hours. We had heard travel horror stories about RyanAir and their luggage restrictions so we were determined to pack as light as possible just in case this newcomer decided to take the discount airline lead; Each of us had a super tiny duffle bag for the 5 day vacation. Good thing it was warmer in Spain than Germany. Puffy coats and long pants were not going to fit in our tiny bags. We managed to board the plane with room to spare in the overhead compartments and found the airline staff to be professional and helpful. We also learned that it’s pronounced “Vwelling” like “dwelling” and not, “Vue-ling” like seeing a great view. Hmmm….

We decided to rent an apartment through homeaway.com and found a great place north of the old town. The place featured 3 bedrooms and a remodeled kitchen and bathroom but the biggest selling point was a large screen TV, English stations AND a playstation console. Our kids were in hotel heaven. It became a chore to get them to leave the apartment for city sightseeing but we managed to entice them out the door with the promise of sun, sand and surf. Our first day out we followed the trusty Rick Steves guidebook and took the Las Ramblas walk, along with every other tourist in Barcelona.

The wide boulevard is a stroller’s dream; small flower stands and souvenir shops line the pathway and halfway down is the famous La Boqueria Market where fresh squeezed juices and fruit are available to enjoy while you take a look at the unusual offerings at the seafood and meat counters. The market is buzzing with people, both tourists looking for great photo ops and locals who shop daily for their perishables. Each of us tried some fruit (watermelon was a favorite) and I even ordered a chocolate-banana-coconut fruit smoothie. Refreshing and clean-tasting, is how I’d describe it. Not something I would have ever thought to put together. Practically any fruit can be blended and served up to thirsty shoppers.

Sunny skies and warm temps entice us to Barcelonetta Beach

We continued down Las Ramblas to the inner harbor and from there we made a long loop down to Barcelonetta Beach. The sun was calling our names so we sat down, removed our shoes, rolled up our jeans and indulged in this long-lost friend. We probably spent 2 hours on the sand and our pale white bodies soon showed that we’d been in Germany too long. Everyone went home with a free souvenir– a sunburn.
On our way back to the apartment, we walked through Bari Gotic, which is the very old part of town and includes Roman ruins and the Barcelona Cathedral. Everything in the city has an architectural flair which lends a casual and very friendly vibe throughout the city. Everyone considered this first day a success!