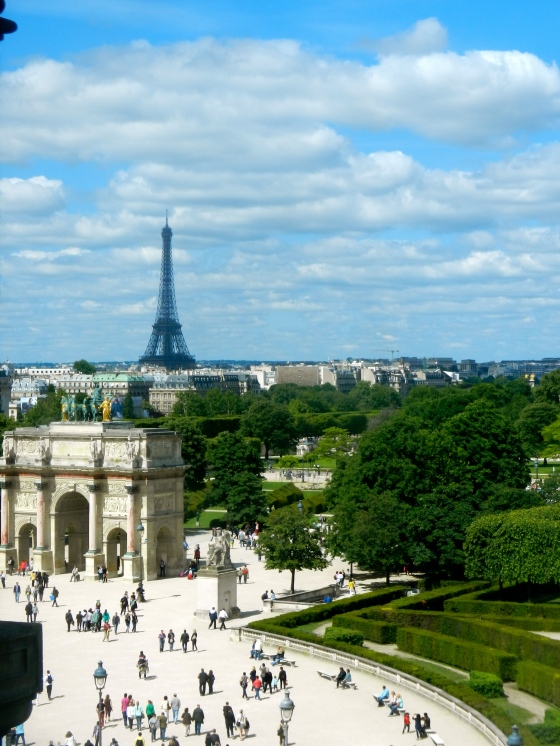 Arc de Triomphe and Eiffel Tower as seen from the Louvre

On our last visit to Paris we promised we had to come back to enjoy the city the way it is advertised in the United States: without children. Now, we had a most enjoyable visit with the kids in February; we toured Arc de Triomphe, Eiffel Tower, Palace of Versailles and the Louvre and of course, spent a full day at Euro Disney. But Tim and I wondered how much better this city could be when not worried about how long the lines were, where we could get pizza instead of fancy french food and what time we could go back to the hotel to watch TV.

We made reservations at the French Army Club, a little gem of a place for military officers that put us just a few blocks from the Place de la Concorde and the entry to Tuileries Garden. We arrived late in the evening but the twinkling lights of the Eiffel Tower made it impossible to stay inside. We dumped our luggage in the room and headed out for some night life. We spent 2 hours walking along the banks of the Seine River while making grand plans for our future including finding a home base (which looks a lot like a log cabin with heated flooring, his and her sitting rooms and a wrap-around porch in the mountains of Colorado) for our numerous travels to the ends of the earth. When we tired of making travel plans, we resorted to our default activity: people watching, which never fails to provide a chuckle. Tonight’s conundrum:why are there tour buses still making the Paris rounds at 11pm at night? It seems like an ungodly hour to stop and take pictures of the Obelisk. Once back in our hotel, we quickly drifted off to sleep with thoughts of a magical city awaiting us in the morning.

One of the highlights of any Paris stay is the phenomenal French breakfasts. To call it a “continental breakfast” is so demeaning. Sure, it’s a lot of bread and jam but then, you’re forgetting it’s French bread and French preserves all perfectly displayed on tall silver stands that glimmer in the morning sun. We indulged in chocolate croissants that were light and flaky and the filling so warm and gooey. We drank greedily from the hot chocolate dispenser which is more like molten liquid chocolate than the Swiss Miss packet I usually stir into hot water. Our hotel has a dress code so we were pretty pleased that we managed to make it to the breakfast room in “approved” walking shoes and passable pants. Other guests are apparently French and know exactly what a dress code means: suit jacket and tie for men and beautiful sweater sets and pearls for the ladies. I dismissed our faux pas as one of necessity: we were simple tourists who needed to have sensible shoes and Columbia shirts that wick away sweat during the day.

We set out for the French Army Museum following breakfast. The air was crisp but the sun was bright so we decided to walk to the museum which is located just across the Seine River, about a 20 minute jaunt for us. For Tim, touring the museum is a pleasure because he knows every weapon, plan or concept presented to the viewer. For me, an audio guide is always the best way to move through the exhibits. We started by viewing Napoleon’s tomb which is large, impressive and inspiring. We then proceeded to find the stuffed horses (something I found exotic and strange) and rounded out our visit by walking through the two World Wars (1870-1945). After 3 days in Normandy, I was well-versed in the second war but the first world war still remained fuzzy. Touring this exhibit just made me more confused–can I say “too much war!”

Napoleon’s tomb…not the same stone as Herod’s bathtub in Rome, but a close second

The French Army Museum housed in a former imperial palace

A lasting impression of the Army museum…neat rows of cannon

The remainder of our Saturday was a sheer delight. We went to the Palace of Versailles and rented bicycles for the afternoon. It was so much fun to go way far out in the gardens and then look back at the palace. It is one huge house. An added bonus was visiting the different fountains in the gardens surrounded by classical French music to accompany the water works. It was not hard to imagine what it would be like to be one of the favored guests of the king or queen and simply strolling along the groves with a secret admirer.

Shhh…it’s only a small bottle of French bordeaux

Tim and I snuck in a bottle of wine and sat back to enjoy a glass and the view. I could have stayed forever!

Tim ready to create some mischief near the fountains 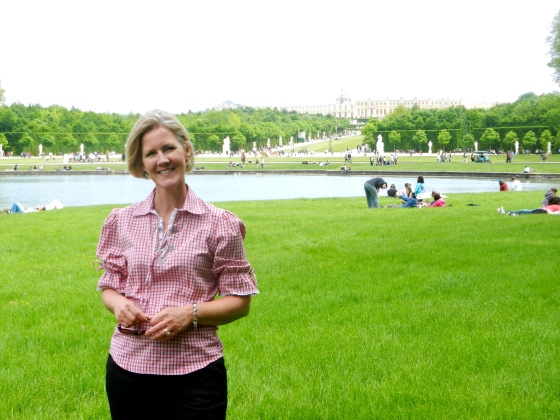 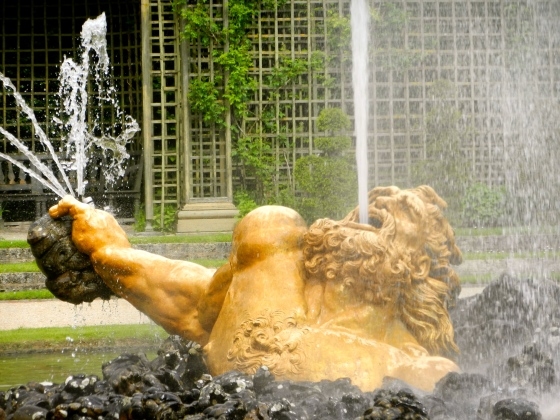