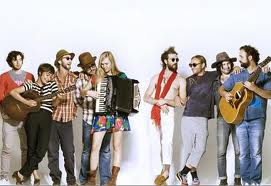 Edward Sharpe and the Magnetic Zeros

A couple of years ago, Lindsey came home with some new music and told me I had to listen to this great song. It was “Home” by Edward Sharpe and the Magnetic Zeros and it became our family’s anthem, particularly this phrase in the second verse:

Moats and boats and waterfalls
Alleyways and pay phone calls
I’ve been everywhere with you, that’s true

So, I’ve been hooked on the Zeros for some time now. And then, they ended up touring with Mumford and Sons and Old Crow Medicine Show and produced the movie, “Big Easy Express.” (which we now own, thanks to Lindsey’s two for one birthday gift) With facebook and twitter, it’s super easy to be a fan and I happened to read a posting that the Zeros were offering a special concert in Berlin prior to their big festival gig in Ireland July 17. So, we scheduled our Berlin trip around the concert and decided to take Lauren along with us (just so we didn’t look so old in the crowd)

Jade and Alexander take us for a spin

We took the metro from our hotel about an hour prior to the concert start time. When we got to the venue, we produced our “print at home” tickets, got our hands stamped and then went in search of a seat inside. And then, we realized that this was going to be one unusual concert. No seating at all; just people casually reclining on the large wooden dance floor sipping white wine and beer in plastic cups. There were about 50 people already inside and we managed to get floor space in what I would call the “third row from stage.” Of course, being this close also implies that you’re going to be part of the dancing group—those wildly hopping kids who seem to know every word of every song that the band plays, and they scream along loudly and off key. We stayed put, for Lauren’s sake. We enjoyed a cup of wine and then the opening act came on stage: Joe Banfie from Manchester and his back up singer/guitarist/car driver and roadie, Scott. They told us they had driven one full day from England with an evening pit stop in Holland to sleep in their car. That’s just so beginning rock star, I was sold. Joe’s got a great voice and I loved seeing him after the show signing CDs and talking with new fans. And then we saw Scott loading their little car with the equipment. (Lauren says, “Hey, there’s Scott!” and she kept walking by) After an hour wait for the Zeros’ road crew to set up, tune and retune instruments it was time for the show. And the crowd went wild. English was the language of choice but Alexander (the lead singer) did manage to greet everyone in German. And then, they were off on a wonderful musical journey. All of our favorite songs, a few new ones, a couple of old-time hymns (sung by Jade) and some sing-alongs. Alex asked the audience what they wanted to hear and Lauren screamed out, “Give me a sign.” Alex asked the band if they wanted to sing it and they said no but at least Alex talked to Lauren and she was completely satisfied.

Alex joins the crowd on the floor and sings for us

The band has a folksy sound and general vibe from all the members…coveralls worn by one of the guys, accordion and roller-skating organ music played by another. The general feel is one of happiness and light. At one point during the show, Alex walked into the standing-room only crowd and asked everyone to sit down. He then proceeded to sing from within the middle of the circle as everyone swayed along to the music. The band members even abandoned their posts and joined the crowd by sitting on the edge of the stage.

I’d say that the vast majority of those in attendance were ardent Zeros fans. Most knew every word to every song; some, like Tim and me, had our favorites and then just enjoyed listening to the new music, barely moving our bodies to the music. Everyone was very well-behaved; even the smokers had the decency to puff and keep the smoke down low. It all wrapped up at 12:40am—way past my bedtime. We made it back on the metro with other concert goers and enjoyed a smooth trip back to the hotel recalling our favorite concert moments.