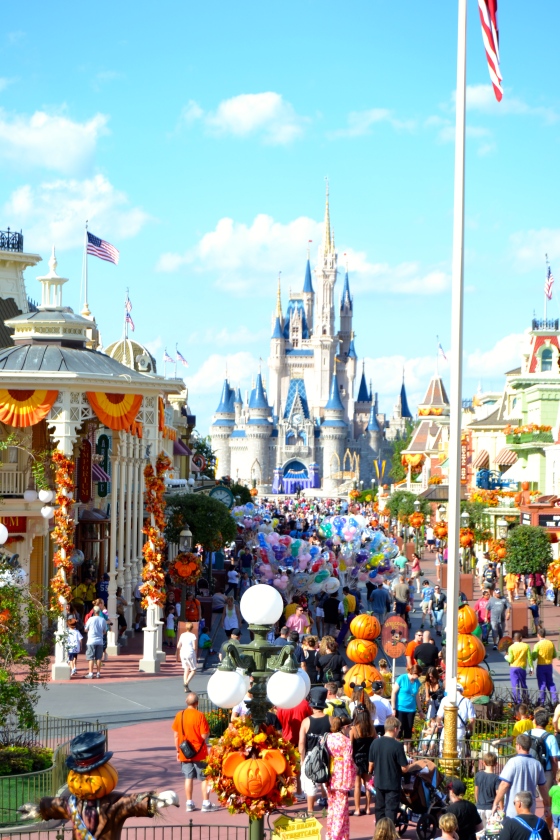 For military families, moving back to the States after an overseas assignment creates a bit of a logistical nightmare. It’s true, you show up on American soil completely jet lagged and exhausted, but also energized and pumped with adrenalin. It had been 6 weeks since we had packed up our household goods in Lupburg Germany and we were at the very end of our “positivity rope.” The allure of living like nomads had completely worn off–and we craved the opportunity to set down roots in a new neighborhood. After our 9 hour flight, we could taste the comfort of southern cooking and hospitality and this propelled us to start house hunting on Day 2 of our return. After 3 days visiting some interesting rental properties in the Pinehurst area, we selected House number 2 (read about our experience If we were on House Hunters)then we drove to Disneyworld.

I love Disney because… they have fire and bubbles in abundant supply.  On the morning we visited Epcot, cast members lined the walkways blowing bubbles.  And, as intent as we were to be the first riders on TestTrack, it was a monumental effort to simply walk by and not make eye contact with cast members.   Other families weren’t so lucky. Those bubbles stop people dead in their tracks. There’s something quite alluring about luminescent spheres floating in the air, waiting to be caught or popped by little hands. Throughout the week, every time bubbles showed up, a quiet hush came over the area and everyone joined in on the fun.  Kids and adults alike were fond of the light-up bubble gun which comes with a refillable tank for non-stop bubble fun. It always managed to halt a cranky child’s whines—if only for a moment.

As darkness descended on the Disney parks,  bubbles made way for fire in the form of fireworks, of course. There really is something magical about the transformation of Cinderella’s Castle from a fairy tale home to the stunning backdrop of a music and light show. On the evening we chose to watch the fireworks, we arrived 75 minutes before show time and found a nice place to wait on the sidewalk sipping Starbucks coffee and chatting up our favorite Disney cast member, Stacey. When the lights started to dim, we joined a throng of eager wish-makers and rushed Main Street to watch the show. It was standing room only as parents hoisted little kids onto their shoulders and waited for the show to begin. We are die-hard thrill seekers so skipping rides for 2 hours was difficult but we’re glad we did as the show just isn’t the same when you’re standing in line on the opposite side of the park.

I love Disney because…Disney cast members have got to be the happiest people on earth, or at least they’re really good at faking it. I can’t think of a better customer service experience than our check in at Pop Century resort, one of the value properties in the Disney Resort Complex. When we first arrived, the computer system was down and lines looked to be about an hour long. We ditched the line and went out for dinner, assuming it would be resolved when we returned. And, we were right–we had next in line service. Our front desk clerk, Mikey, was apologetic for the earlier wait and did his best to be efficient and quick in getting us assigned a room. He not only explained the new Magicbands system, he took the time to walk us through connecting the bands to MyDisneyExperience.com, the online site that lets you plan your vacation. And, he did all of this with an ear to ear grin and a can-do attitude. From the parking attendants to the housekeepers, there was never a cross word spoken by a cast member. Hearing the phrase, “Have a magical day!” came to be  normal parting words during our day.

Will and Lilly participate in the kids activities at Pop Century

I love Disney because… they invented Magicbands. I’m not sure how long these bracelets have been used by the Disney resorts, but the concept is sheer brilliance. Imagine wearing one accessory that gives you access to everything at Disney. All snacks, meals, souvenirs can be charged using the bands and hotel room access is a simple swipe of the Mickey icon. By using the MyDisneyExperience.com website, you can reserve up to 3 Fastpasses every day and make dining reservations throughout the resort. Photopass pictures taken by cast members at the parks can also be stored to the bracelet. As much as I hate charging small amounts, this handy bracelet became my new best friend. A simple 4 digit pin is all that’s needed and it didn’t take long for Lilly to decipher the number. Lucky for us (and other families with clever youngsters), the Disney masterminds have blocked anyone on a Child’s ticket from being able to charge using the Magicband. Brilliant, I declare!

I love Disney because… Extra magic hours are a delight. For guests staying at a Disney property, you can enter up to an hour early or stay up to two hours after closing during the magic hours. Only one park each day has these extra hours but if you have the drive to get up extra early and arrive at least 30 minutes before the opening of extra magic hours, you can practically guarantee you will be first on your favorite ride. We did extra morning hours for Animal Kingdom (arrived at 7:30 for an 8:00am opening) and managed to do Expedition Everest 3 times before the brain received the message from the stomach that breakfast foods weren’t sitting so well. We even had time to trek all the way across the park to Kilamanjaro Safaris and had next in line service for a safari ride. By 10:30am, we had pretty much seen the whole park and the Fastpass times we reserved online hadn’t even kicked in yet. Through the week we were also first on TestTrack, Big Thunder Mountain and Splash Mountain. Now, being first means absolutely nothing other than bragging rights,  but there’s a certain thrill to opening up a ride for the day. 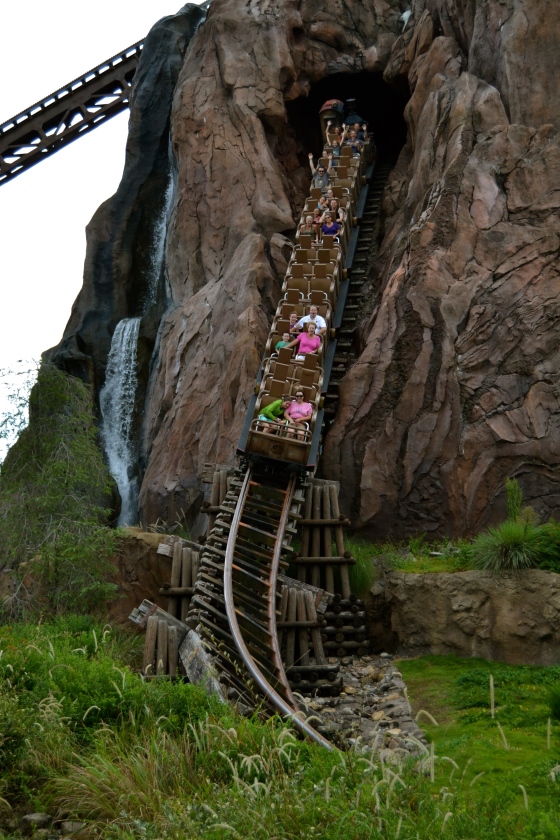 First ones on the Expedition Everest ride at Animal Kingdom

I love Disney because…Crowd Control has been taken to a whole new level. It must be a pretty fine balance between ensuring the safety of all guests and allowing visitors some personal freedom in deciding how to tour a park. Long gone are the days of taking off running from the main gates to your favorite ride. (I remember as a kid making a bee-line for Space Mountain at Disneyland) Instead, cast members use a series of ropes and limited entry distances to help spread out crowds. For example: at Magic Kingdom they have been known to open up Main Street up to the Ice Cream Parlor to allow guests to shop and take pictures before taking off for distant lands. On the day we toured Magic Kingdom, we wanted to get to Thunder Mountain first. Once the park opened we were able to keep up with the teen boys who were just a step ahead of us. As we rounded the bend, we came to an abrupt halt. Out of nowhere, a cast member was standing in front of us with a big smile—and a long rope. We quickly discovered that there is no longer one way quicker than another. Cast members monitor guests’ strides on their way to the rides and maintain a healthy positive attitude in all. When we were within 100 yards of the ride, the cast members quickly stepped aside and wished us all a Magical Day!

Taking a spin in DinoRama

Disney was a drag because…the plethora of little rascals (those electric scooters for mobility-impaired guests) and mini-van size strollers make  navigating the park treacherous. Wheelchairs simply aren’t a problem…often, they are people-powered and travel at a consistent and deliberate pace. However, the electric scooters are a royal pain; many times we observed drivers who weren’t paying attention and took up too much room as they dodged walking guests. And, there’s nothing more annoying than a 40ish woman, sipping a frozen margarita at Epcot, driving a scooter with her legs propped up on the handlebars, oblivious to everyone around her. The super-size strollers are another problem for walking guests. I know you hate to hear your kids complain as much as I do but watching a 6 year old being cooled by a snap-on battery powered fan while sipping a drink without raising a finger is just obnoxious. 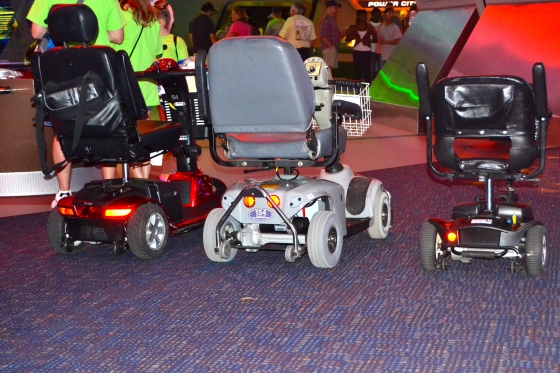 Special parking spaces for electric scooter are all over Disney parks