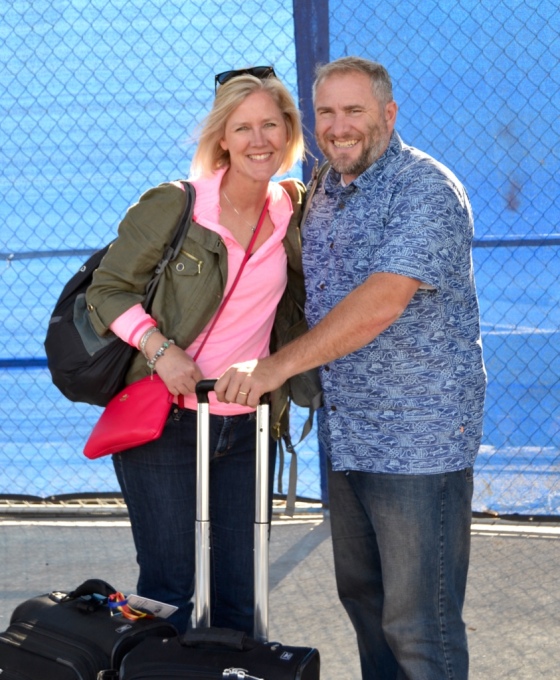 And we’re off! LAX to Rome

We arrived in Rome after a satisfying flight on Norwegian Air, an upstart airline catching a lot of press for its new planes (the 787 Dreamliner) young workforce and no frills service. We paid rock bottom prices but this meant NO frills…no blankets, no beverage service, no large bags to check and no seat assignments. Both Tim and I found this liberating…there is plenty of legroom and unlimited screen time in the seats in front of you. We had a quick layover in London and we took lunch at Pret, the handy and inexpensive sandwich shop we remembered from our visit to London a few years ago.
All added it was about 15 hours of travel putting us in our room at Hotel Zara around 10pm. Perfect time to explore the city and shake off some jetlag. It was about a 20 minute walk form our room to Trevi Fountain. Crowds at the fountain are notoriously crazy but at midnight it was just us and a few other hardy travelers. There’s a convenient gelato shop near the fountain which was still open at midnight so we got a cone and then posed for pictures with our handy selfie stick. Tim swore that he’d never use one but after experiencing the convenience of not asking strangers to use the camera to take your pic, he was hooked. (thanks Bryan for loaning us your special “Angels”stick.) They say if you toss a coin in the fountain you’re guaranteed a return visit. The last time we were here, we didn’t think anything of it but now that were back, we can’t help but think it’s true. We continued our nighttime walk around town seeing Trajan’s Column and the Forum surrounding it. We made it back to the room by 1am and felt tired enough to fall asleep with plans to hit ancient Rome in the morning. 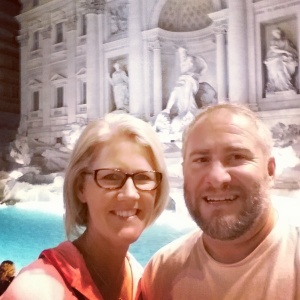 ANCIENT ROME
Tim and I are pretty happy walkers, especially if it means saving a few dollars on train rides. we enjoy being out in the fresh air and hitting our stride and Rome is one of those cities that offers so many turn-the-corner WOWS! sore feet is just part of the deal. I purchased new Keen walking shoes before the trip and I have never been happier with a purchase. That’s not to say I didn’t feel any pain, but I wobbled and stubbed my toes enough times to be thankful for Keen’s protective rubber coating on my feet.

We went to the Colosseum first after stopping at the TI stand near our hotel. We purchased the ROMAPass card which gave us entry to two main attractions, a discount of tons of other places and unlimited train travel for 3 days. This pass was a fabulous purchase! We were able to avoid the lines at the Forum and Colosseum and even became adept at using the Metro to hop from place to place (though the Rome metro system is not extensive and you’ll be walking the streets no matter what) Last time we visited, the Colosseum still had scaffolding on it; this time, it’s clean and white and the lower level (where the tigers were kept) is open to tour. We opted to skip the guided tour and pay for the general admission which gets you into the Colosseum, Palatine Hill and the Forum. I think if this had been our first visit, we would have jumped at the deluxe tour and a chance to walk underground.

After the Colosseum, we walked over to Palatine Hill, one of the seven hills of Rome which overlooks the Forum below. According to Roman mythology, the Palatine Hill was the location of the cave where Romulus and Remus were found by the she-wolf Lupa that kept them alive. From here we had a good view of the Colosseum and an aqueduct below. The Hill funnels visitors directly into the Forum, the center for Roman public life. The Forum was the city center, a place for public speeches, trials and processions. Today, it is filled with headless statues, crumbling pillars and really old massive buildings. It’s here where Julius Caesar was killed and his body cremated, and an altar remains to mark the spot. Excavations continue in this area; a new Basilica was uncovered following an earthquake in the ’80s and is now open to visitors, complete with mosaic floors and frescoes. Just goes to show that what we see in Rome is just the tip of the iceberg. 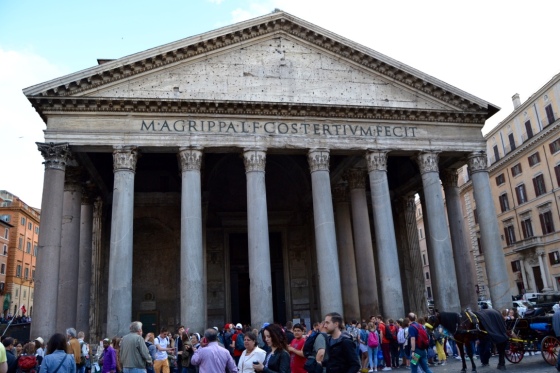 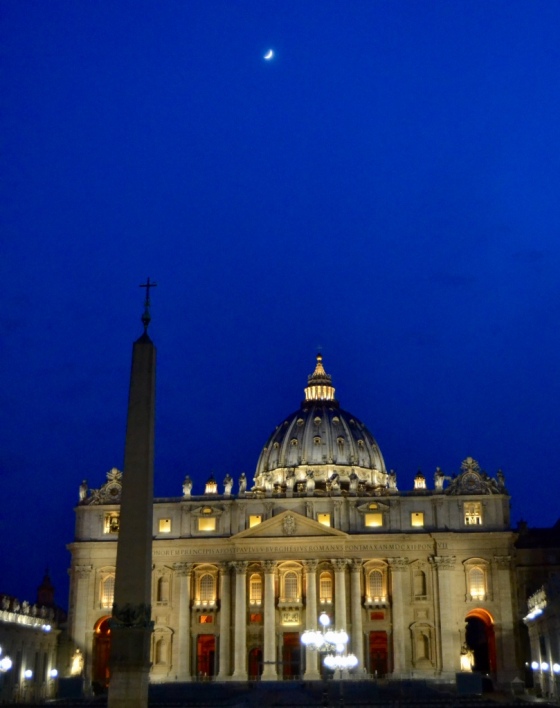 Our day was a long one. after the ancient city sights, we went over to the Spanish Steps (closed for refurbishment), stopped into a few churches and finally collapsed in our bed at 9pm. And though we were exhausted, both of us were up and ready for the day at 3am, despite our best efforts to thoroughly tire our bodies out, jetlag struck again. 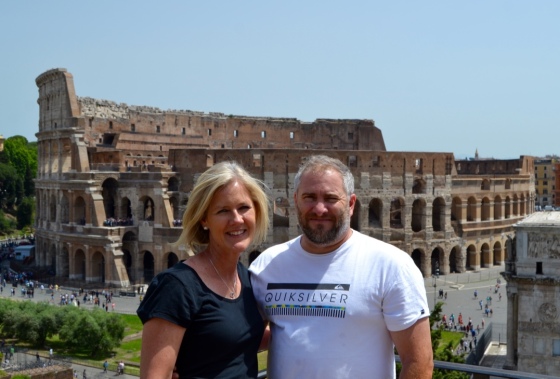 The Coliseum as seen from Palatine Hill 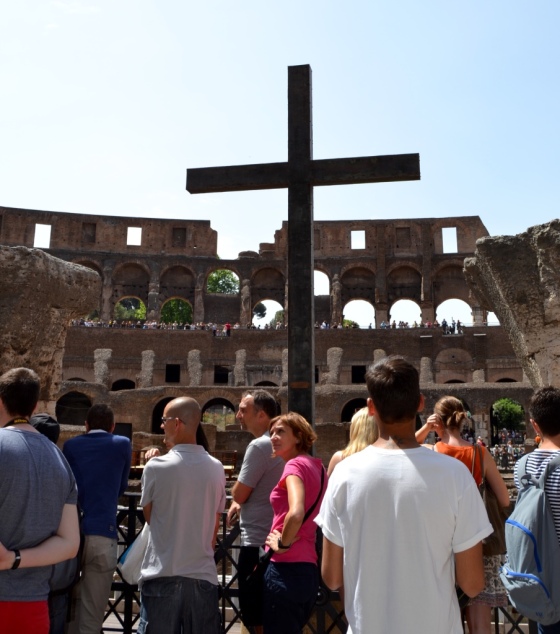 The Emperor’s Cross in Coliseum 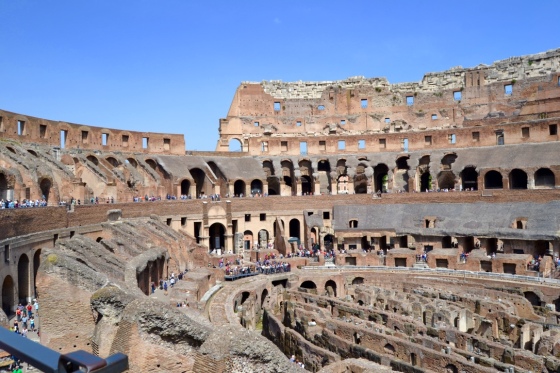 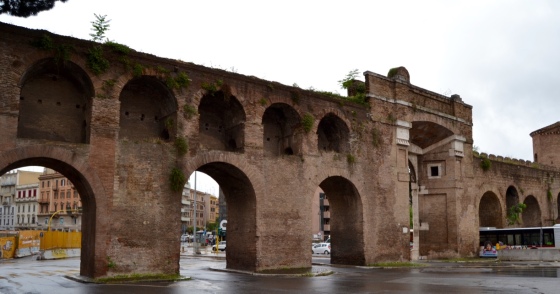 The ancient city walls of Rome 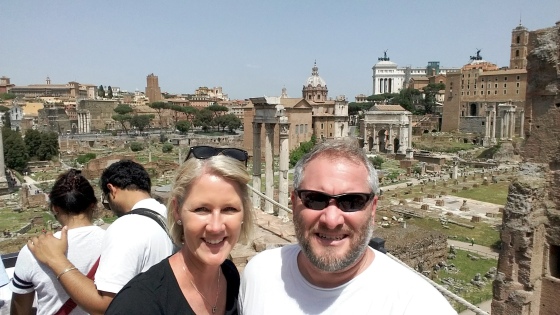