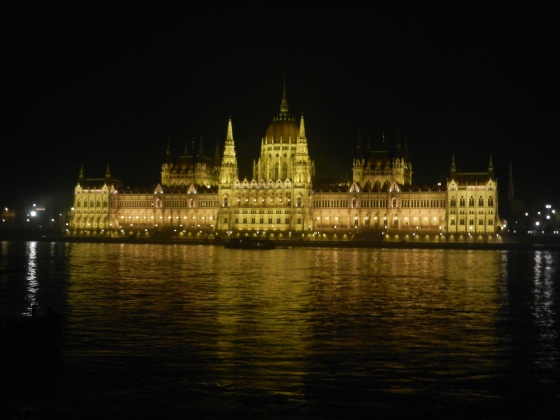 From Vienna we traveled to Hungary and visited the cities of Buda and Pest, which were joined together in 1873 and linked by the beautiful Chain Bridge which spans the Danube River. Budapest is a beautiful city and the views are equally grand from both sides of the river. On one bank you can gaze at the British Parliament-inspired Hungarian Parliament building; and on the other side, you get a spectacular view of Fisherman’s Bastion. Budapest is a city for lazy walking…along the river, across bridges, up and down hills and the kids indulged my desire to see the parliament building at night…from the other side of the river. They were troopers and it was only Lilly who insisted what we were doing was “Dumb!”

Budapest also is home to steamy and relaxing thermal waters. We spent a leisurely afternoon soaking in the mineral tubs and large outdoor pools at the Széchenyi thermal baths. It was a bit tricky figuring out where to change and store our clothing but once we unlocked the cabin with our plastic bracelets we were quick to dive in along with hundreds of other Christmas revelers. After an hour in the warm pool, we found the warmer pool and then made our way inside to the stinky pools. The complex is huge and we only ventured as far as the first 3 rooms where we found green pools that smelled like rotten eggs, saunas with magical colored lights and a cold dip which we think had a melting iceberg floating on top. When we managed to drag our tired bodies back to the cabin, Tim insisted he had never felt more relaxed. Although, he could have enjoyed a massage at the baths as well.

Near our hotel was the public ice skating rink located just outside the castle gates. What an incredible experience to ice skate on Christmas in the glow of a castle. We met up with the Becker family and had fun trying to remember how to skate without slipping and sliding all over the ice. On this trip, Will made it all by himself around the rink several times and Lilly was comfortable just having someone pull her along.

It's the memory of a splendid place that continues to go with the moving traveler for the rest of life, after he has had the experience of it and gone away. Hemingway said to a friend..." If you are lucky enough to have lived in Paris as a young man, then wherever you go for the rest of your life, it stays with you, for Paris is a moveable feast."