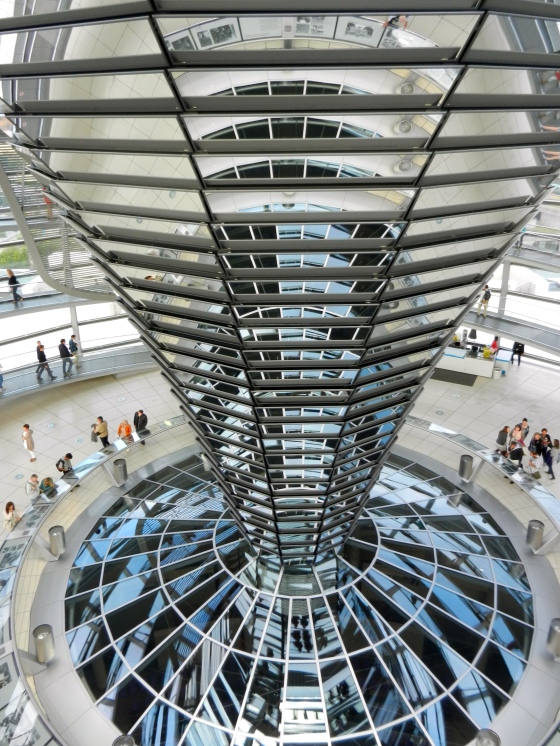 During our time in Berlin, we managed to cover a lot of ground.  Will commented that the thing he liked best about the city was it’s “excellent public transportation that gets you to where you want to be.”  For the two full days we were in Berlin we bought the group day ticket which got 5 of us unlimited public transportation for 15 euros.  We also had to purchase an additional child’s unlimited use ticket in order for the whole family to travel together.  It was quite a bargain and a good alternative to walking everywhere.  In fact, it was rare to see a lot of vehicle traffic in the city–I think Berliners have done a great job of using public transportation and helping tourists get a handle on the system too.
On Sunday, the family split up with the girls going to the zoo and Tim, Will and I going on a Third Reich Tour of Berlin.  The 3 hour walking tour was fascinating and included seeing the sites of Hitler’s bunker, the no man’s zone between East and West Berlin, the Luftwaffe building and various other notorious buildings symbolizing the tragic events leading up to WWII and the separation of the city.  We chose berlinwalks.com for our tour needs because we’ve used them before in other cities and their guides have never failed to both inform and entertain us.  Mort, our guide for Berlin, offered many personal illustrations about life in Berlin during 1920s through today  and we have a good handle of the role Berlin played in the Great War.
Our afternoon was spent in the Pergamon Museum and a walk at the East Side Gallery to see the Wall.  I was a bit disappointed with the Pergamon, primarily because my vision of what the temple should look like was not at all how it actually is today.   For some reason, I was expecting a fully formed temple with goddesses and gods gloriously guarding the entrance.  Instead, it’s a combination of historical pieces and “blank areas” that you have to use the imagination to bring the structure to life.  Far more impressive is the Ishtar Gate in the adjoining room.  While it is also missing a great deal of the original structure, the sheer size and deep blue color of the tiles allows the mind to visualize how grand the space really was.
The visit to the East Side Gallery to see the artists’ contributions to the Wall was inspirational, if a bit long.  Lilly was simply dragging throughout the entire walk but I did see 2 paintings I consider iconic…The Kiss and The Trabi breaking through the wall.  Once I saw those images, I felt like I could put a checkbox on the experience.

It's the memory of a splendid place that continues to go with the moving traveler for the rest of life, after he has had the experience of it and gone away. Hemingway said to a friend..." If you are lucky enough to have lived in Paris as a young man, then wherever you go for the rest of your life, it stays with you, for Paris is a moveable feast."