Tim’s mom stayed true to her word. She promised that this trip had no agenda, there was no mandatory family photo op, no scheduled luau with matching Hilo Hattie outfits, and absolutely no assigned cooking and cleaning schedule.  But what she did ask was something everyone eagerly looked forward to: Hanauma Bay! I’m not going to do the story justice but what I recall is that the bay holds special memories for Mom and Dad and it has something to do with their  time in Hawaii when Dad was in a wheelchair, Mom was pregnant with Jill and “the boys” were super naughty.  Dad made arrangements with Snorkel Bob’s to rent enter enough gear for the whole crew and we arrived at the bay well before 9am…which was good, because even at that time the parking lot was getting pretty full.  After paying our entry fee and then viewing the obligatory safety video (which convinced Lilly that blowfish will cause excruciating pain just by looking at them) we made the long trek down the path to a relatively quiet spot on the sand. It took us a good 20 minutes to get masks and fins on and then another 10 minutes to figure out the buddy system. “I don’t think having Will in charge of Lilly is a good idea out in the ocean.  Neither one wants the other to really live, and that poses a problem.”

Soon, the crew was out in the protected waters.  Tim affixed his new gadget, the GoPro camera, to his head and off he went to find some fish. Occasionally, children would slowly rise out of the water and make their way to the cooler for a drink while others just sat in the shallow waters and let the gentle waves wash over them.  It was exciting to hear the kids talk about what they’d seen under water and the best comment came from Lilly: “I gave birth to a sea turtle!”  Apparently, the creature had swum right between her legs.

We managed to make another excursion with the snorkel gear to Shark Cove later in the week. The water seemed to be clearer and the fish more plentiful. But, the most action with the masks and fins was had at the house pool.  What fun it is to dive and swim in clean pool water which wearing a mask to protect your eyes. 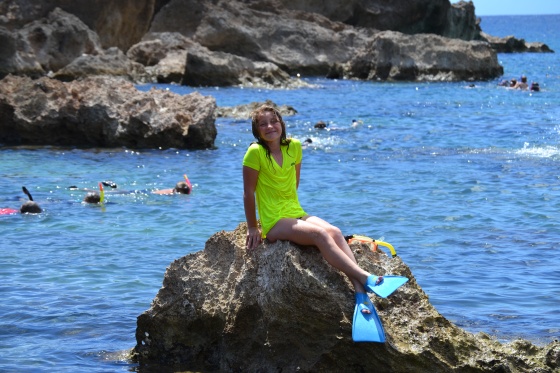