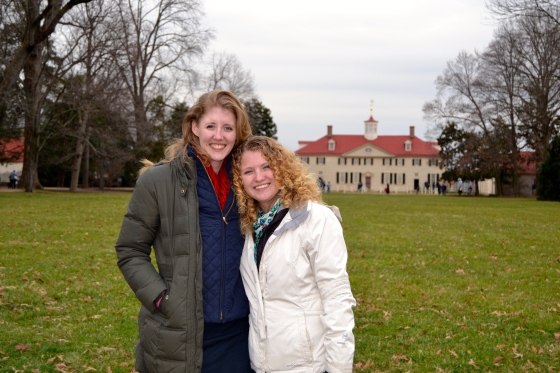 DC and the larger metropolitan area is fast becoming our favorite place to visit on the East Coast. This is likely attributed to the following facts:

We knew when Lauren came home in early December that the fun times were sure to begin. After a few days of re-integration to the family and some snuggle time with our dog Lady, she and I took off for DC to snag Lindsey for a week of family time. Lauren even had her first taste of capitol city traffic while driving to Lindsey’s office at the Arboretum.   Let’s just say that she and I agree it’s maddening and much worse than LA traffic.

While Lindsey finished up her work week, Lauren and I did squeeze in 2 days of touring the city. One of the first stops was the Holocaust Memorial. I hadn’t been there before and after living in Germany, I was very interested in the US interpretation of the Hitler’s master plan to exterminate the Jews.

There is no photography allowed in the memorial which keeps the mood appropriately somber. We arrived soon after opening time and found just one high school group touring in front of us. Before entering the permanent exhibit, visitors pick up a paper passport card which includes a picture and brief biography of a person who lived during this tragic time.  Unfortunately, both Lauren and I had people who died in a concentration camp. The start of the exhibit is accessed by elevator and gives a very dramatic beginning to the journey. The video presentations sprinkled throughout the memorial are well done and provide a necessary time to pause and reflect while taking in the information. One area that was particularly well done is the recreation of a Jewish ghetto including cobbled streets, wooden bridge and a train car that visitors can walk through. I think several museums in Germany do a better job of presenting the rise of the Nazi Party and why German citizens so willingly participated, but overall this museum is one that shouldn’t be missed. I’d allow at least 2 hours to tour the main exhibit.

A side exhibit that both of us enjoyed was Daniel’s Story, a wonderful exhibit that takes visitors through the city streets and life of a young boy in Germany. It is geared to the younger visitors but I thought it was informative for adults as well. 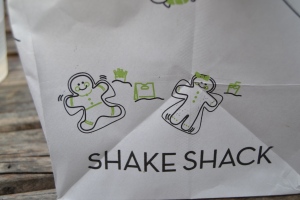 Lauren and I also made it across town to hit the National Portrait Gallery and eat at Shake Shack, that wonderfully greasy burger joint that makes my mouth water. I tried to convince Lauren that it was better than In-n-Out but she didn’t agree. Again, I had a Shack burger, fries and a chocolate shake. Still my favorite fast-food hamburger. Afterwards, I took Lauren across the street and into the American Art Museum for a super quick look at 2 of my favorite gems: the Neon United States by Nam June Paik and the short film depicting the fall into paradise. Since we were going to return to DC after Christmas I thought I’d save the rest of the museum for another time. 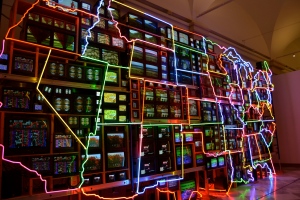 We had plenty of time to do some last minute Christmas shopping at Pentagon City Mall. We hit up C-Wonder because they were having an extreme sale: 75% off everything in the store. When I saw that fixtures and store décor were on sale I knew they were going out of business. Too bad everything seemed to be in size Super Small but the girls had fun shopping and helping the staff reduce inventory.

We got an early start to our trip back to Pinehurst on Saturday. I mean, if you have to wake up to go to the airport to drop off a dear friend at 4am anyway, then you might as well continue south for the next 5 hours. And, Lauren and I discovered, when there’s no traffic in DC. Pure bliss—even if we were dazed and sleep-deprived.

It's the memory of a splendid place that continues to go with the moving traveler for the rest of life, after he has had the experience of it and gone away. Hemingway said to a friend..." If you are lucky enough to have lived in Paris as a young man, then wherever you go for the rest of your life, it stays with you, for Paris is a moveable feast."
%d bloggers like this: